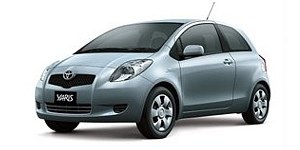 Toyota redesigned the Yaris in early 2005, going on sale in Japan that February. The Toyota Belta sedan, shares underpinnings with the Yaris. However, while the Vitz was designed at Toyota's European ED design studios, the Belta was designed at their Japanese design studios. While the outgoing Vitz hatchback and Platz sedan look and feel virtually alike, the redesigned Vitz and Belta are more subtly related. The two cars share a frame and the drivetrain components however the sheet metal is different.

For North America, the XP130 series was released in the fourth quarter of 2011 as a 2012 model under the Toyota Yaris name. Offered in both three- and five-door hatchback styles, Toyota Yaris offers o ...

Using your audio system
—Some basics This Section describes some of the basic features on Toyota audio systems. Some information may not pertain to your system. Your audio system works when the ignition key is in the ...