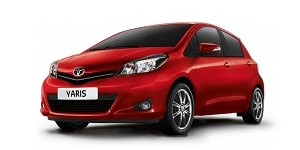 For North America, the XP130 series was released in the fourth quarter of 2011 as a 2012 model under the Toyota Yaris name. Offered in both three- and five-door hatchback styles, Toyota Yaris offers only the 1.5-liter engine with a five-speed manual or optional four-speed automatic transmission. The 2012 model year North American Yaris three- and five-door hatchbacks are available in the base L (CE in Canada), mid-range LE and sport-tuned SE trim levels.

Toyota redesigned the Yaris in early 2005, going on sale in Japan that February. The Toyota Belta sedan, shares underpinnings with the Yaris. However, while the Vitz was designed at Toyota's European ...

If your vehicle overheats
The following may indicate that your vehicle is overheating. ● The high engine coolant temperature warning light (→P. 306) comes on or flashes, or a loss of engine power is experienced. ...

Headlights and turn signals
Except for Canada For Canada HEADLIGHTS To turn on the following lights: Twist the headlight/turn signal lever knob. Position 1—Parking, tail, license plate, side marker and instrume ...