Replace the battery with a new one if it is depleted.

■ You will need the following items: 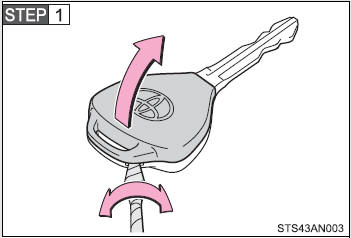 Remove the cover. To prevent damage to the key, cover the tip of the screwdriver with a tape. 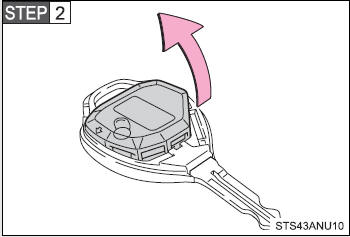 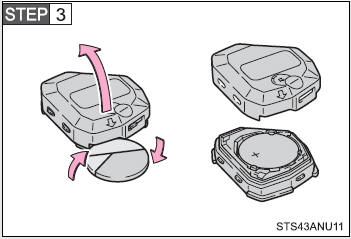 Open the case cover using a coin protected with tape etc. and remove the depleted battery.

Insert a new battery with the “+” terminal facing up. 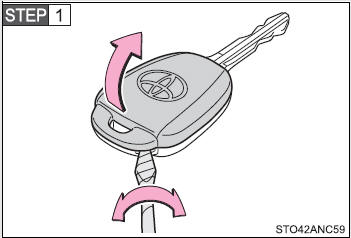 To prevent damage to the key, cover the tip of the screwdriver with a tape. To prevent the buttons from being disassembled, face the button surface downward. 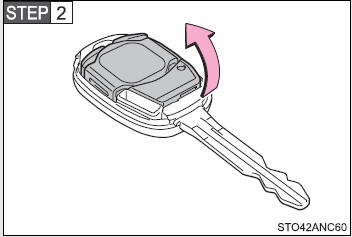 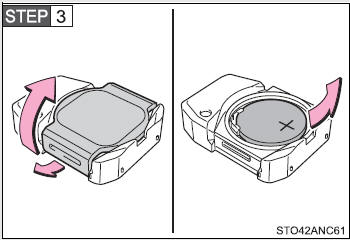 Open the case cover and remove the depleted battery.

Insert a new battery with the “+” terminal facing up.

●Batteries can be purchased at your Toyota dealer, local electrical appliance shops or camera stores.
●Replace only with the same or equivalent type recommended by the manufacturer.
●Dispose of used batteries according to local laws.

■If the key battery is depleted

The following symptoms may occur:

●The wireless remote control will not function properly.
●The operational range will be reduced.

■When replacing the module (type B only) 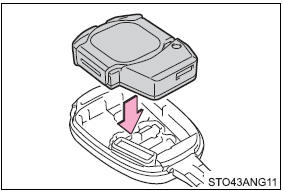 Replace the module from right above. Replacing it from diagonally above may prevent the key buttons from operating properly.

■Removed battery and other parts

These parts are small and if swallowed by a child, they can cause choking. Keep away from children. Failure to do so could result in death or serious injury.

■For normal operation after replacing the battery

●Always work with dry hands.
Moisture may cause the battery to rust.
●Do not touch or move any other components inside the remote control.
●Do not bend either of the battery terminals.

If any of the electrical components do not operate, a fuse may have blown. If this happens, check and replace the fuses as necessary. Turn the engine switch to the “LOCK” position. Open th ...