Make sure that all occupants are wearing their seat belts before driving the vehicle.

■ Correct use of the seat belts 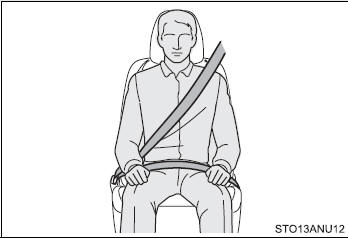 ● Extend the shoulder belt so that it comes fully over the shoulder, but does not come into contact with the neck or slide off the shoulder.
● Position the lap belt as low as possible over the hips.
● Adjust the position of the seatback. Sit up straight and well back in the seat.
● Do not twist the seat belt.

■ Fastening and releasing the seat belt 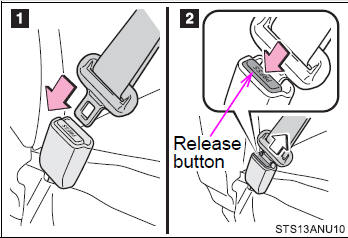 To fasten the seat belt, push the plate into the buckle until a click sound is heard.

To release the seat belt, Release press the release button.

The rear center seat belt is a 3-point type restraint with 2 buckles. Both seat belt buckles must be correctly located and securely latched for proper operation. 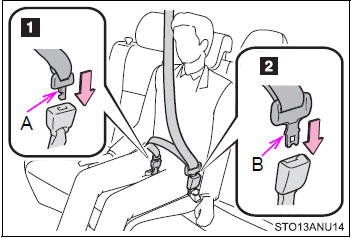 Make sure that the buckle

is securely latched ready for use of the center seat belt.

Matches the tab with hooked end (tab “A”)

Matches the tab with concave end (tab “B”)

The rear center seat belt can be completely released only when necessary such as when folding down the rear seat. 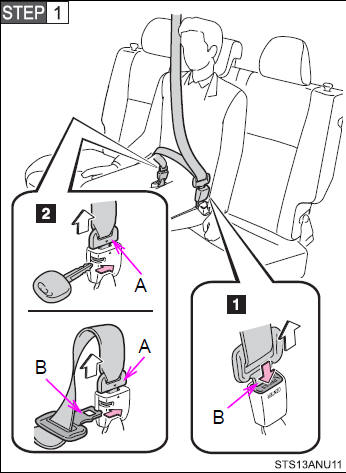 To release the tab “B”, press the release button.

To release the tab “A”, insert the key or tab “B” into the hole on the buckle.

Retract the belt slowly when releasing and stowing the seat belt. 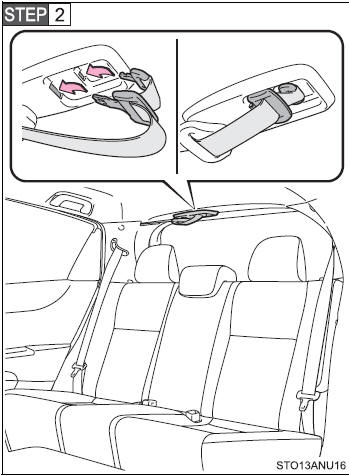 Stow the seat belt tabs in the cover set in the roof as shown. 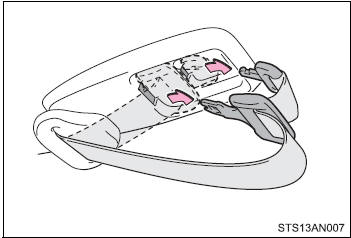 Remove the tabs from the cover. 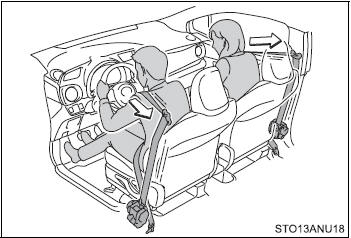 The pretensioner helps the seat belt to quickly restrain the occupant by retracting the seat belt when the vehicle is subjected to certain types of severe frontal or side collision.

The pretensioner does not activate in the event of a minor frontal impact, a minor side impact, a rear impact or a vehicle rollover.

The retractor will lock the belt during a sudden stop or on impact. It may also lock if you lean forward too quickly. A slow, easy motion will allow the belt to extend so that you can move around fully.

When a passenger’s shoulder belt is completely extended and then retracted even slightly, the belt is locked in that position and cannot be extended. This feature is used to hold the child restraint system (CRS) firmly. To free the belt again, fully retract the belt and then pull the belt out once more. (→P. 102) 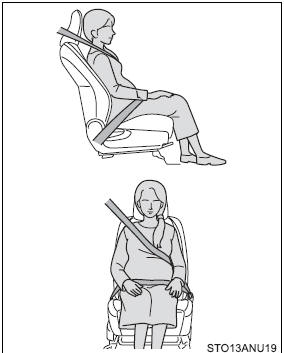 Obtain medical advice and wear the seat belt in the proper way. (→P. 54)

Women who are pregnant should position the lap belt as low as possible over the hips in the same manner as other occupants. Extend the shoulder belt completely over the shoulder and position the belt across the chest. Avoid belt contact over the rounding of the abdominal area. If the seat belt is not worn properly, not only a pregnant woman, but also the fetus could suffer death or serious injury as a result of sudden braking or a collision.

Obtain medical advice and wear the seat belt in the proper way. (→P. 54)

The seat belts of your vehicle were principally designed for persons of adult size.

■Replacing the belt after the pretensioner has been activated

If your seat belts cannot be fastened securely because they are not long enough, a personalized seat belt extender is available from your Toyota dealer free of charge.

Observe the following precautions to reduce the risk of injury in the event of sudden braking, sudden swerving or an accident. Failure to do so may cause death or serious injury.

●Ensure that all passengers wear a seat belt.
●Always wear a seat belt properly.
●Each seat belt should be used by one person only. Do not use a seat belt for more than one person at once, including children.
●Toyota recommends that children be seated in the rear seat and always use a seat belt and/or an appropriate child restraint system.
●To achieve a proper seating position, do not recline the seat more than necessary. The seat belt is most effective when the occupants are sitting up straight and well back in the seats.
●Do not wear the shoulder belt under your arm.
●Always wear your seat belt low and snug across your hips.

■When children are in the vehicle

Do not allow children to play with the seat belt. If the seat belt becomes twisted around a child’s neck, it may lead to choking or other serious injuries that could result in death. If this occurs and the buckle cannot be unfastened, scissors should be used to cut the belt.

●Do not damage the seat belts by allowing the belt, plate, or buckle to be jammed in the door.<. ●Inspect the seat belt system periodically. Check for cuts, fraying, and loose parts. Do not use a damaged seat belt until it is replaced. Damaged seat belts cannot protect an occupant from death or serious injury.
●Ensure that the belt and plate are locked and the belt is not twisted. If the seat belt does not function correctly, immediately contact your Toyota dealer.
●Replace the seat assembly, including the belts, if your vehicle has been involved in a serious accident, even if there’s no obvious damage.
●Do not attempt to install, remove, modify, disassemble or dispose of the seat belts. Have any necessary repairs carried out by your Toyota dealer. Inappropriate handling of the pretensioner may prevent it from operating properly, resulting in death or serious injury. 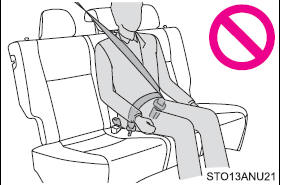 ■When using a seat belt extender