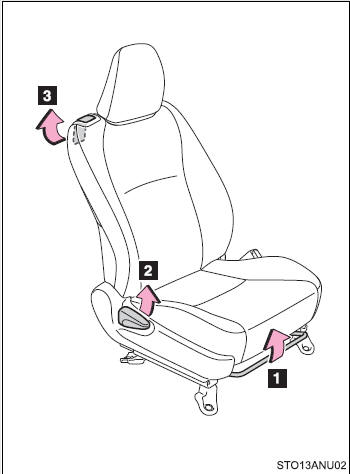 ■ Getting in or out the vehicle 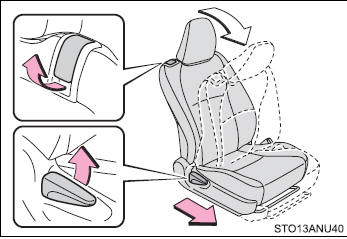 Lift the seatback lock release lever or seatback angle adjustment lever. The seatback will fold forward, and the seat’s slide lock will be released. Move the seat all the way forward.

Slide the seat backward and then lift the seatback. The seat will be set and locked to its previous slide position automatically, and the seatback will be returned to the fully upright position. In the following situations, the seat slide position memory will not be saved or will be overwritten.

■If the seat cannot be returned to the memorized slide position

Lift the seatback lock release lever or seatback angle adjustment lever after removing the luggage, or after having the passenger get out or sit properly so that the seat can be slid back to the previous position.

●Be careful that the seat does not hit passengers or luggage.
●To reduce the risk of sliding under the lap belt during a collision, do not recline the seat more than necessary.
If the seat is too reclined, the lap belt may slide past the hips and apply restraint forces directly to the abdomen, or your neck may contact the shoulder belt, increasing the risk of death or serious injury in the event of an accident.
Adjustments should not be made while driving as the seat may unexpectedly move and cause the driver to lose control of the vehicle.
●After adjusting the seat, make sure that the seat is locked in position.
●Never allow anyone to touch seatback lock release levers while the vehicle is moving.
●If anyone is in the vicinity, make sure they are clear of the seat back path and let them know that the seat is about to move.

■After returning the seatback to the upright position

Make sure the seatback is securely locked by pushing it forward and rearward. Failure to do so may result in death or serious injury.

Do not use the seatback angle adjustment lever and seatback lock release lever at the same time. If they are used together, the seat lock mechanism may be damaged.

Customizable features
Your vehicle includes a variety of electronic features that can be personalized to suit your preferences. Programming these preferences requires specialized equipment and may be performed by your ...