Vehicles with an automatic transmission

Check that the parking brake is set.

Check that the shift lever is set in P.

Turn the engine switch to the “START” position to start the engine.

Vehicles with a manual transmission

Check that the parking brake is set.

Check that the shift lever is set in N.

Turn the engine switch to the “START” position to start the engine. 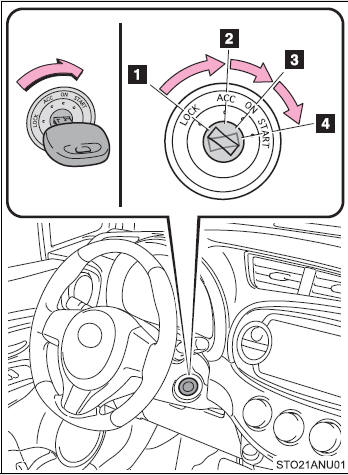 Some electrical components such as the audio system can be used.

All electrical components can be used.

For starting the engine.

■Turning the key from “ACC” to “LOCK” 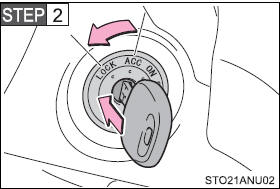 Push in the key and turn it to the “LOCK” position.

The engine immobilizer system may not have been deactivated. (→P. 72)

■When the steering lock cannot be released 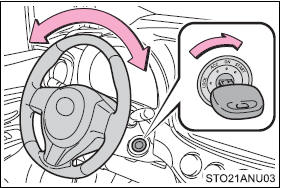 When starting the engine, the engine switch may seem stuck in the “LOCK” position. To free it, turn the key while turning the steering wheel slightly left and right.

A buzzer sounds if the driver’s door is opened while the engine switch is in the “LOCK” or “ACC” position to remind you to remove the key.

■When starting the engine

Always start the engine while sitting in the driver’s seat. Do not depress the accelerator pedal while starting the engine under any circumstances. Doing so may cause an accident resulting in death or serious injury.

Do not leave the engine switch in the “ACC” or “ON” position for long periods of time without the engine running.

■When starting the engine

●Do not crank the engine for more than 30 seconds at a time. This may overheat the starter and wiring systems.
●Do not race a cold engine.
●If the engine becomes difficult to start or stalls frequently, have the engine checked immediately.

The following procedures should be observed to ensure safe driving: ■ Starting the engine → P. 124 ■ Driving Vehicles with an automatic transmission With the brake pedal depre ...

Select a shift position appropriate for the driving conditions. ■ Shifting the shift lever While the engine switch is in the “ON” position, move the shift lever with the brake pedal ...

Rear floor side panel extension (ASSY)
REPLACEMENT With the quarter panel and body lower back panel removed. REMOVAL INSTALLATION Temporarily install the new parts and measure each part of the new parts in accordance with the bod ...

Brake system
The tandem master cylinder brake system is a hydraulic system with two separate sub-systems. If either sub-system should fail, the other will still work. However, the pedal will be harder to press ...