Toyota Yaris: If your vehicle overheats

The following may indicate that your vehicle is overheating.

● The high engine coolant temperature warning light (→P. 306) comes on or flashes, or a loss of engine power is experienced. (For example, the vehicle speed does not increase.)
● Steam comes out from under the hood.

Stop the vehicle in a safe place and turn off the air conditioning system, and then stop the engine.

If you see steam:

Carefully lift the hood after the steam subsides.

If you do not see steam: 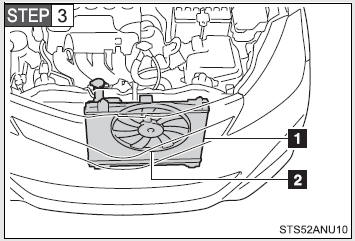 After the engine has cooled down sufficiently, inspect the hoses and radiator core (radiator) for any leaks.

If a large amount of coolant leaks, immediately contact your Toyota dealer. 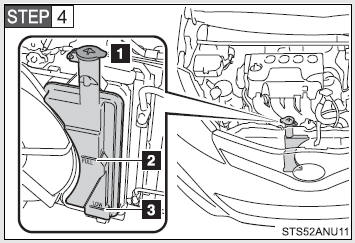 The coolant level is satisfactory if it is between the “FULL” and “LOW” lines on the reservoir. 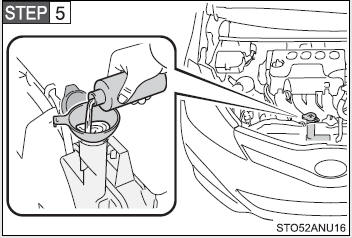 Water can be used in an emergency if coolant is unavailable.

Start the engine and turn the air conditioning system on to check that the radiator cooling fan operates and to check for coolant leaks from the radiator or hoses.

If the fan is not operating:

Stop the engine immediately and contact your Toyota dealer.

If the fan is operating:

Have the vehicle inspected at the nearest Toyota dealer.

●If steam is seen coming from under the hood, do not open the hood until the steam has subsided. The engine compartment may be very hot, causing serious injuries such as burns.
●Keep hands and clothing (especially a tie, a scarf or a muffler) away from the fans and belts. Failure to do so may cause the hands or clothing to be caught, resulting in serious injury.
●Do not loosen the radiator cap and the coolant reservoir cap while the engine and radiator are hot.
Serious injury, such as burns, may result from hot coolant and steam released under pressure.

Wait until the engine has cooled down before adding engine coolant. When adding coolant, do so slowly. Adding cool coolant to a hot engine too quickly can cause damage to the engine.

■To prevent damage to the cooling system

●Avoid contaminating the coolant with foreign matter (such as sand or dust etc.).
●Do not use commercially available coolant additives.

If the vehicle battery is discharged

The following procedures may be used to start the engine if the vehicle’s battery is discharged. You can also call your Toyota dealer or qualified repair shop. If you have a set of jumper (or b ...

If the vehicle becomes stuck

Carry out the following procedures if the tires spin or the vehicle becomes stuck in mud, dirt, or snow: Stop the engine. Set the parking brake and shift the shift lever to P (vehicles with an ...

If you lose your keys
New genuine Toyota keys can be made by your Toyota dealer using the other key and the key number stamped on your key number plate. ...

Checking the radiator and condenser
If any of the above parts are extremely dirty or you are not sure of their condition, take your vehicle to a Toyota dealer. CAUTION. To prevent burning yourself, be careful not to touch the radiat ...