Use the cruise control to maintain a set speed without depressing the accelerator pedal. 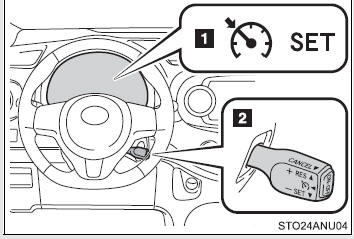 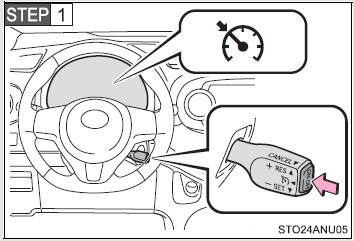 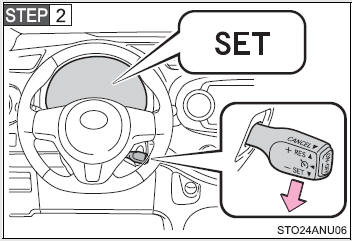 Accelerate or decelerate the vehicle to the desired speed, and push the lever down to set the speed. “SET” indicator will come on. The vehicle speed at the moment the lever is released becomes the set speed.

To change the set speed, operate the lever until the desired set speed is obtained. 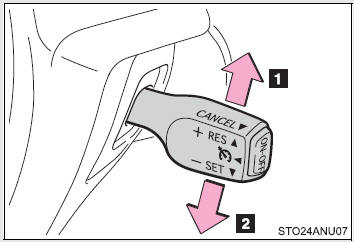 The set speed will be increased or decreased as follows: 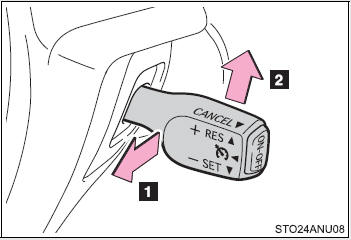 Pulling the lever toward you cancels the constant speed control.

The speed setting is also canceled when the brakes are applied or the clutch pedal (manual transmission only) is depressed.

Pushing the lever up resumes the constant speed control.

Resuming is available when the vehicle speed is more than approximately 25 mph (40 km/h).

■Cruise control can be set when

●The shift lever is in the D or range 3. (vehicles with an automatic transmission)
●Vehicle speed is above approximately 25 mph (40 km/h).

■Accelerating after setting the vehicle speed

●The vehicle can be accelerated normally. After acceleration, the set speed resumes.
●Even without canceling the cruise control, the set speed can be increased by first accelerating the vehicle to the desired speed and then pushing the lever down to set the new speed.

Cruise control will stop maintaining the vehicle speed in any of the following situations.

■To avoid operating the cruise control by mistake

Switch the cruise control off using the “ON-OFF” button when not in use.

Do not use cruise control in any of the following situations. Doing so may result in loss of control and could cause an accident resulting in death or serious injury.

●In heavy traffic
●On roads with sharp bends
●On winding roads
●On slippery roads, such as those covered with rain, ice or snow
●On steep hills
Vehicle speed may exceed the set speed when driving down a steep hill.
●When your vehicle is towing a trailer or during emergency towing

To help enhance driving safety and performance, the following systems operate automatically in response to various driving situations. Be aware, however, that these systems are supplementary and s ...

Adhesive Application Area Work Procedure
NOTE. This vehicle has areas on the Quarter Panel and Quarter Wheel Housing Outer Panel that are joined together only with adhesive. It is necessary to conduct the correct repair procedures for h ...

Important health and safety information about your Toyota
CAUTION. WARNING: Engine exhaust, some of its constituents, and a wide variety of automobile components contain or emit chemicals known to the State of California to cause cancer and birth defect ...