The system sounds the alarm and flashes the lights when forced entry is detected.

■ Triggering of the alarm

The alarm is triggered in the following situations when the alarm is set:

● A locked door is unlocked or opened in any way other than using a key or wireless remote control. (The doors will lock again automatically.)
● The hood is opened.
● The battery is reconnected. 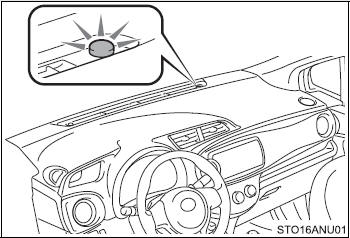 Close the doors and hood, and lock all the doors. The system will be set automatically after 30 seconds.

The indicator light changes from being on to flashing when the system is set.

■ Deactivating or stopping the alarm

Do one of the following to deactivate or stop the alarm:

● Unlock the doors.
● Turn the engine switch to the “ACC” or “ON” position, or start the engine. (The alarm will be deactivated or stopped after a few seconds.)

The vehicle has a maintenance-free type alarm system.

■Items to check before locking the vehicle

To prevent unexpected triggering of the alarm and vehicle theft, make sure of the following:

■Triggering of the alarm

The alarm may be triggered in the following situations: (Stopping the alarm deactivates the alarm system.) 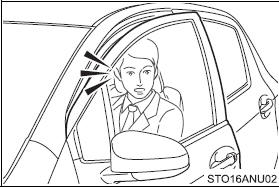 ●A person inside the vehicle opens a door or hood.

●The battery is recharged or replaced when the vehicle is locked.

■When the battery is disconnected

■To ensure the system operates correctly

Do not modify or remove the system. If modified or removed, the proper operation of the system cannot be guaranteed.

The vehicle’s keys have built-in transponder chips that prevent the engine from starting if a key has not been previously registered in the vehicle’s on-board computer. Never leave the k ...

These labels are attached to the vehicle to reduce vehicle theft by facilitating the tracing and recovery of parts from stolen vehicles. Do not remove under penalty of law. ...