The wireless remote control can be used to lock and unlock the vehicle. 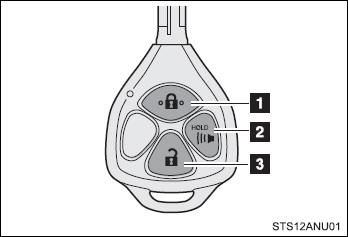 Locks all the doors

Sounds the alarm (press and hold)

Unlocks all the doors

Locks all the doors

Unlocks all the doors

Sounds the alarm (press and hold)

The emergency flashers flash to indicate that the doors have been locked/ unlocked. (Locked: once; Unlocked: twice) 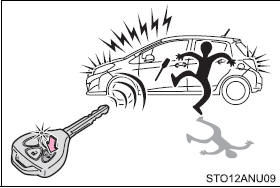 is pressed for longer than about 1 second, an alarm will sound intermittently and the vehicle lights will flash to deter any person from trying to break into or damage your vehicle. To stop the alarm, press any button on the wireless remote control.

If a door is not opened within approximately 60 seconds after the vehicle is unlocked, the security feature automatically locks the vehicle again.

Using the wireless remote control to lock the doors will set the alarm system. (→P. 74)

The wireless remote control function may not operate normally in the following situations:

●When the wireless key battery is depleted
●Near a TV tower, electric power plant, gas station, radio station, large display, airport or other facility that generates strong radio waves or electrical noise
●When carrying a portable radio, cellular phone or other wireless communication device
●When the wireless key is in contact with, or is covered by a metallic object
●When another wireless key (that emits radio waves) is being used nearby
●If window tint with a metallic content or metallic objects are attached to the rear window

If the wireless remote control function does not operate, the battery may be depleted. Replace the battery when necessary. (→P. 271)

■Customization that can be configured at Toyota dealer

This device complies with part 15 of the FCC Rules. Operation is subject to the following two conditions: (1) This device may not cause harmful interference, and (2) this device must accept any interference received, including interference that may cause undesired operation.

Changes or modifications not expressly approved by the party responsible for compliance could void the user’s authority to operate the equipment.

Opening, closing and locking the doors

Rear floor sidemember (CUT)
REPLACEMENT With the body lower back panel removed. REMOVAL INSTALLATION Temporarily install the new parts and measure each part of the new parts in accordance with the body dimension diagra ...